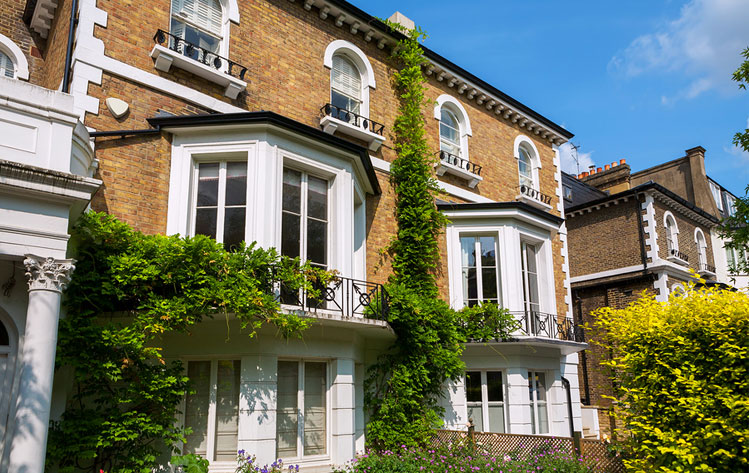 The amount of homes in Britain that are worth £1million or more has risen by 49% in the last year, according to data released earlier in the week.

According to property website Zoopla, living on a street like Millionaire’s Row in London is no longer a rarity. There are now over 3,700 streets in London that play host to houses worth more than £1million, and there are 10,613 of these streets in the whole of Britain.

The figures released estimate that 484,081 households can now claim that they are property millionaires, due to an increase in house prices. Zoopla also found that 12 streets in London were home to houses priced at more than 10m, demonstrating that the real price of entry into the big league property market is now higher than ever.

Kensington Palace Gardens was named again as the most expensive street in Britain, with average property prices reaching £42.7 million. The average house costs £263,705, but these mansions, closely situated to the Duke and Duchess of Cambridge’s home, cost 162 times that.

Famous residents of Kensington Palace Gardens include steel magnate Lakshmi Mittal and Roman Abramovich, Chelsea football club owner. Recently a 5 bedroom apartment “in need of modernisation” was on the market for a massive £23.5 million, but it did come with it’s own “chauffeur’s room”.

The capital city’s most prestigious postcode is still W8, where property prices in the area reach a whopping £2.78 million on average. SW7 is the second most expensive postcode, and SW3 comes in third.

Zoopla’s study found that the ten most expensive streets in Britain have actually seen an increase of 12.9% for property prices in the past year, compared to just 6.6% seen across the rest of the country.

Outside of London, the most expensive street to live on was named as Sunninghill Road in Surrey, where properties average at £5.6 million. South Downs Drive in Hale was found to be the North West’s most expensive street, with the average home there costing £2.4 million.

Ty-Gwyn Avenue in Penylan is the most expensive street to be found in Wales, as properties cost just over £1 million each. The most expensive address found in Scotland is reportedly Balmoral Court in Gleneagles Village, Auchterarder, where the average home would set you back just over £2 million.

The most expensive road in the North East is Gubeon Wood in Morpeth, where an average house costs £1.3 million on average, and Old Coastguard Road in Sandbanks, Poole, takes the top position the South West at £2.4 million.

The fast and continuous growth in high-end property prices over the past year has nearly doubled the number of streets across the country containing million pound houses, and the streets in London have continued to attract wealthy overseas investors.

"For the lucky few who can afford these stratospheric price tags, the fabulous mansions on streets like Kensington Palace Gardens and the Boltons are offering very strong returns.

"However, you don't need to be a billionaire to get a chance to own the crème de la crème of property on offer. In Wales and the North East, you can still snap up a prime property in the region's most desirable streets for little over £1m."

Back in 2009, there were fewer than 200,000 homes in Britain worth a million pounds or more, showing just how dramatic the increase has been over the last five years.

Hunters have over 100 offices nationwide including Exeter