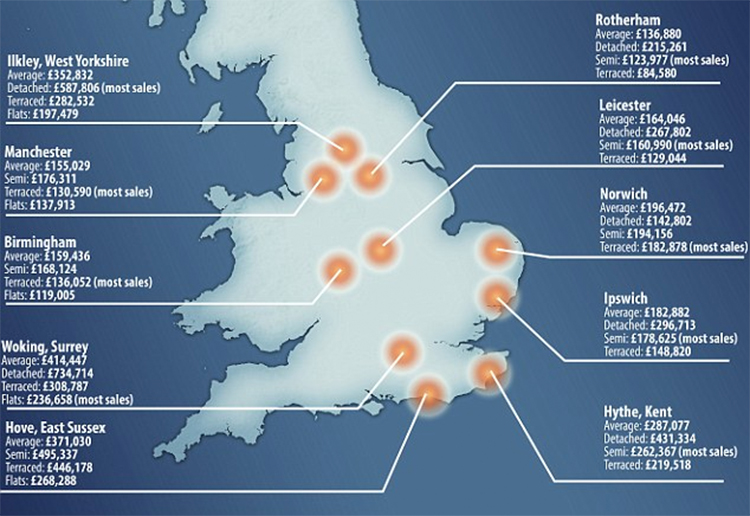 Experts have revealed the top ten places in the country where house prices are likely to boom over the next ten years. All the locations listed are in England and are a mixture of cities and commuter towns. Surprisingly, London is not on the list, and Manchester centre takes the top place.

All ten of the hotspots have a mixture of property types and prices, with some offering detached properties for over half a million pounds, and some offering small terraced houses for just £90,000.

The common trend from this research, found by HouseSimple, is that the average property price in these areas are likely to increase significantly over the next decade, making these locations property hotspots for anyone looking to move.

HouseSimple put together this list of places by asking its ‘property experts’ for their opinion on where they thought the future hotspots would be. The predictions were made based on some key factors, including good transport links, a young population, trendy eateries, and the occasional celebrity resident.

In the north of England, Rotherham in South Yorkshire made the list, with an average property costing you £136,880. In the south of the country, Ipswich made the list, which is very interesting considering it is widely regarded as unfavourable place to live in Suffolk.

“With property prices in London reaching an extortionate high, investors are beginning to look to other areas of the country to dip into.

“With the average UK home now valued at £204,674, and with house prices rising, buyers could potentially buy cheap in these up-and-coming areas and watch the value of their property grow quickly over time.”

Anyone looking to jump into the property market should remember though that house prices don’t always just go up, they can also fall back down. There is also no guarantee that this list is correct, it is simple based on good tell tale signs that a town is on the up.

Manchester centre is predicted to be the top property hotspot in the next decade, with the average home costing £155,000. The expansion of the MetroLink tram system and the development of the new BBC Media City have made the area a very popular place to live.

Rotherham is next on the list, and the coal-mining town is one of the cheapest to make the cut. There has been a half a billion pound investment throughout the town recently, and with new transport links in place, it now has a better connection to the outside world. The average terraced house in Rotherham will cost on average £84,580, and the average detached home will cost you £215,261.

Third on the list is Harborne, which is a very popular area with students. This part of Birmingham will be getting a £6million investment in the coming years and will also benefit from the HS2 rail link once it has been built. Leicester takes fourth place, with the expected average house expected to rocket past the current £164,00 price tag.

The researchers suggest that there are a few key signs to look out for, which will show whether you’re buying in the right place. Trendy food chains are a good sign, as are the presence of estate agents and train stations. Young professionals and students are a good sign too, as are flourishing local amenities and low crime rates.