Welcome to Hunters Stoke on Trent

Our experienced team of local agents has the training, knowledge and skills to maximise every opportunity for your sale or let.

We cover the whole of the Stoke-on-Trent area, including Hanley, Burslem, Longton, Fenton, Tunstall, Trentham and all the surrounding villages.

Get in touch now to discuss your property needs and book your free valuation.

During your sale or let, you have your own dedicated negotiator to guide you. They conduct all your viewings, provide useful viewing feedback, and keep you informed of ongoing marketing opportunities. They also negotiate to ensure you get the best possible price when it comes to offers.

Expert marketing to attract the right buyer or tenant

Marketing your property well is the key to success and we present your home in the best possible way. Through professional photography, glossy brochures, detailed floor plans and stunning property tours make your listing stand out from the crowd.

To make sure your property is seen, we advertise it as standard on popular websites like Rightmove and Zoopla, as well as our social media pages too.

Flexible lettings packages to suit you

Our dedicated lettings team has a wealth of local industry knowledge and experience in Stoke-on-Trent. We provide advice on everything, from attracting the right tenants to improving the return on your investment, year on year. All tenants are fully checked and referenced to make sure that you get a tenant you can trust.

You can also benefit from our professional property management service. In our fully managed lettings package, we cover everything, including rent collection, property inspections, and renewals.

Virtual tours of your property

Our professional 3D walkthroughs generate more interest in your property from local, national and even international buyers.

Stay updated with your sale or let 24/7

You always know what’s happening with your sale or let. Our My Hunters portal is accessible 24/7 and contains all the latest information about your property including upcoming appointments for viewings and feedback too. You can also view offers and review property details too.

Why live in Stoke-on-Trent?

Stoke-on-Trent is a city in central England, roughly halfway between Manchester and Birmingham.

It’s easy to commute to other cities from Stoke-on-Trent, as Birmingham, Manchester, Liverpool and Nottingham are all just an hour away by train. London can be reached in just 90 minutes and there are train services running there every 30 minutes. The nearby M6 makes commuting by car to Manchester, Birmingham or Derby a good option too.

When travelling abroad, locals can choose from Birmingham Airport, Manchester Airport or East Midlands Airport, as all of them can be reached in an hour.

The city centre has all the high street brands and shops you’d expect to find in a big city. The Potteries Centre has a great range of shops and cafes, and it also has a cinema. Trentham Shopping Village is a shopping centre with a difference because all its stores are housed in timber lodges. There are lovely gardens and woodlands to explore too.

When heading out for a meal you can choose from national chains or great independent restaurants.

Stoke-on-Trent is famous worldwide for its pottery and ceramics. Pottery production started here in the 17th century and the city went on to become the largest producer in the country. It’s home to leading brands, including Wedgwood, Emma Bridgewater, Royal Doulton, and Royal Stafford. Due to this history, there are many factory shops in the area selling all the pottery and ceramic items you can imagine and plenty of visitor centres describing the history behind them too.

Our professional 3D Walkthroughs generate more interested to local, national and international buyers. Please click here for the showcase for the above. 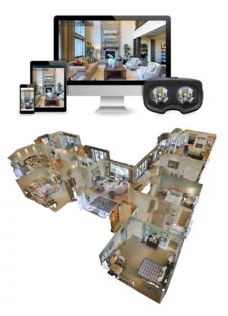 Read what our customers say about us:

Excellent service, cannot recommend Hunters highly enough. Warren & Olivia have handled the sale of our home in a professional & friendly manner throughout.

Very happy with the service I got from Olivia at Hunters. My buy to let had been a problem investment right from the start and I'd lost all faith in estate agents until I moved to Hunters. Despite the lockdown they found me a buyer very quickly and the sales process was straightforward and fairly quick under the circumstances. I don't think Olivia could have given us a better service so I wouldn't hesitate in recommending her/Hunters to others. Thanks Olivia am so grateful to you!

Outstanding service from start to finish.

We approached Hunters after we were let down by another letting agency in the area and right away Daniel and his team were there to guide us through the minefield of changing agencies and getting our properties back up to standard. As we live a considerable distance away from Stoke, it is important for us to have confidence that the best interests of our properties and more importantly our tenants are being looked after. As the lettings team at Hunters are professional and proactive, we have the reassurance that our interests are in safe hands. If an issue ever does arise, Daniel will go above and beyond in devoting his time to provide a swift solution. The system Hunters have in place to report, authorise and rectify defects is smooth and simple to use and Kerry who deals with the maintenance is exemplary. If you're searching for a truly quality, professional agency to make the burden of being a landlord as passive as possible, don't take the risk with anyone else, call Hunters immediately!

This Office is a Member of a Client Money Protection Scheme; A4318

Stoke-on-Trent is a city in central England, that’s roughly halfway between Manchester and Birmingham. The city is well-known for its pottery because production started here in the 17th century, and then the city went on to become the largest pottery producer in the country. Stoke-on-Trent is home to names such as Wedgwood and Royal Doulton.

By train, there are many cities that are less than an hour away, including Birmingham, Manchester, Liverpool and Nottingham. There are services to London running every half an hour, and it takes less than 90 minutes to reach the capital. For those travelling by car, the M6 provides easy access to Manchester, Birmingham and Derby.

For travel further afield, there’s a range of airports within good reach of Stoke-on-Trent. Manchester Airport is just a 45 minutes drive away, whilst Birmingham Airport and East Midlands Airport are both just an hour away.

Stoke-on-Trent was formed through its history of pottery and its world-renowned for it. There’s so much pottery and history to explore within the city, including factories like the Emma Bridgewater Factory, and lots of visitor centres including LoveClay Ceramics Centre, Gladstone Pottery Museum and World of Wedgwood.

There are plenty of other shopping facilities in Stoke-on-Trent too. The city centre has all the high street brands as well as independent stores too. The Potteries Centre has a great range of high street fashion brands, phone stores, sportswear, stationery and much more. There’s also a Cineworld cinema and plenty of food and drink outlets. Trentham Shopping Village provides a unique shopping experience with shops, cafes and restaurants all housed within 78 timber lodges. There are beautiful gardens to explore here too, and a lovely fairy trail that goes through the woods, which is lots of fun for children.

Stoke-on-Trent has a fantastic range of restaurants to enjoy, from national chains such as Pizza Express and Gourmet Burger Kitchen to formal dining, like David’s Brasserie at the Trentham Estate. There are great independent restaurants in the city. Baby Russets is a traditional English restaurant serving up some hearty options like good pies, and KLAY pizzeria and bar with amazing pizzas.

There are good healthcare facilities in the city with plenty of doctors, pharmacies and dentists, as well as Royal Stoke University Hospital.

There’s plenty to experience in and around Stoke-on-Trent too, such as Trentham Monkey Forest with 140 Barbary macaques wandering free among the forest. There are two canals running through the city, providing lovely walking routes and narrowboat trips.

Stoke on Trent is the closest city to Alton Towers, which has more than 50 rides and attractions. Waterworld is a fantastic indoor waterpark in Stoke-on-Trent, which makes a great day out for the family.